Whether the difficult choices you confront have to do with divorce and its many components, such as child custody, equitable distribution or international/interstate abduction, or a criminal arrest requiring your appearance in Superior or Municipal Court – including the technical field of DUI defense work – you can be assured that we will handle your case with the utmost care.

During his teenage years, Mr. Deni was one of the top student athletes in New Jersey. He was named First Team All-State in football, First Team All-State in baseball, and was Batting Champion of the Mercer County American Legion Baseball League. When not playing sports in high school, Mr. Deni worked at Nick DiCrescenzo and Sons Meat Market with his grandfather and uncles.

Following his graduation from South Hunterdon Regional High School, Mr. Deni did a post-graduate year at Bordentown Military Institute. After prep school, he attended Pennsylvania Military College (now Widener University), where he was elected president of the class of 1969. During the summer he worked construction around the New Jersey State House. Little did he know that in future years he would be legal counsel to the New Jersey Legislature, Sen. Walter Foran and Minority Leader and future New Jersey Gov. Tom Kean.

Mr. Deni attended Seton Hall University Law School, where he was elected student senator of the class of 1972. While a student at Seton Hall, he was chosen to represent the Law School in the prestigious Trial Moot Court competition against other law schools.

During the summers that Mr. Deni attended law school, he was a law clerk for the New Jersey Legislature and also legal assistant to Motor Vehicles Commission Director Ray Marini.

Unlike many attorneys in New Jersey who claim an expertise in a certain area of the law, Mr. Deni is one of the few, if not the only, lawyer in the state to possess such a ubiquitous legal background that he is able to advocate and protect his clients' interests and well-being across nearly all areas of the law.

Highlights of Mr. Deni's career include:

Over the course of his career, Mr. Deni has successfully tried and settled millions of dollars in cases involving accidents, wrongful death, work-related injuries, product liability, and medical malpractice. Given the many changes in the law over the years, and to better serve his clients, Mr. Deni is now affiliated with other law firms that concentrate and specialize in these areas of law.

Mr. Deni has represented sellers and buyers in residential, commercial and industrial real estate transactions, and has represented numerous financial institutions as a consultant.

Mr. Deni has been involved in defending and prosecuting claims of beneficiaries, executors, and administrators of estates. In two trials during 2018, he successfully set aside wills and annuities that excluded his clients as beneficiaries. By working for months and interviewing numerous witnesses, Mr. Deni was able to prove "undue influence and fraudulent conduct." As a result, his clients received their fair shares of the estate and annuities.

Mr. Deni has served as legal counsel to attorneys and clients for many years. Often contacted for a second opinion, he has assisted parties in all areas of the law. Similarly, through his relationships with lawyers and law firms in New Jersey, New York, Delaware, Philadelphia and California, Mr. Deni can accommodate and serve his clients’ needs with highly specialized consulting attorneys in all areas of the law. 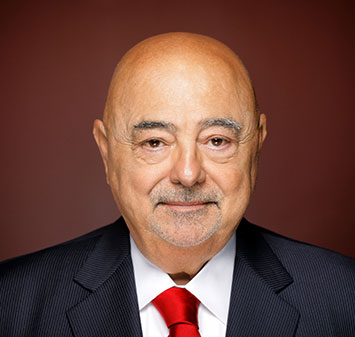 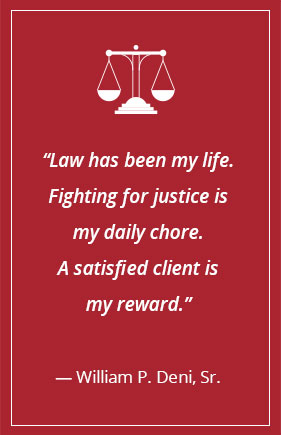